I want kids to trick-or-treat. I want them out in dark, tripping over capes and clown shoes, spitting on everyone as they yell “Trick or treat!” through plastic fangs. I want the young ones to come to my door and look up at me with that look of resigned confusion that says, “Lady, I don’t know what’s 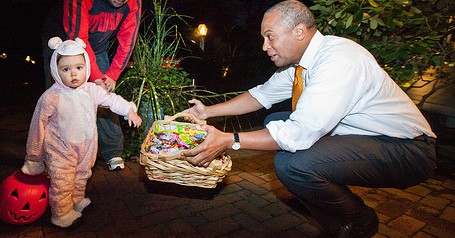 going on. The big ones, they dressed me up like some kind of pink rodent and are parading me around in the dark. Strangers keep giving me stuff I’m not allowed to eat. I suspect I’m being used as some kind of candy lure. I’m just going along with it because it makes the big ones smile and, well, what choice do I have?”

I want to drop Butterfingers in the pillowcases of properly costumed teens who manage to drop their guard enough to offer the evening’s greeting in a clear voice. I want; I really want the cool uncostumed teens to show up so I can ask them to please sing a song or dance instead. That’s the All Hallow’s Eve deal: You show up properly dressed and call out. I admire your efforts in exchange for candy. You say, “thank you” and everyone gets what they want. There are procedures if you cannot comply, and they involve singing, dancing, or a good joke.

I get the impression that fewer and fewer kids are out on Halloween night. Maybe it’s because I grew up in a warmer climate where we only had to wear a jacket as we ran around neighborhoods. In the upper Midwest, a knit cap and puffy coat destroy the aesthetic of any dainty fairy or fearsome warrior. The weather doesn’t explain all of it; people here go fishing through a hole in the ice… and they aren’t even beginning to starve.

Parents are fun slayers. Gauntlet thrown. Parents don’t want to get cold, don’t want to traipse around in the dark and don’t trust their kids or neighbors enough to send the kids out alone. I get that. I don’t let mine go out alone… I send their father with them so I can stay home and have more conversation with small people than they desire. I understand that it’s a school night. I know that kids come home with pounds of teeth rotting, appetite killing, behavior modifying, tasty crap. I get it. But…

I want the tradition to continue. For one thing, it is not a holiday I want dragged out. I like it as a single evening’s activity. Sending kids out trick-or-treating is many times easier than throwing Halloween parties. I only clean the porch for trick-or-treating. I want childfree adults remember their childhoods. I want them to think about the kids in their area and buy treats for them. Yes, I wish it could be apples instead of candy corn, but I won’t throw out all the good fun of trick-or-treating just because candy isn’t a healthy choice. I want neighborhoods to open up their doors and their generosity to small wandering bands of mermaids and zombies. I want kids to wear costumes in public because it is SO FUN.  Every Batman should run through the darkness, cool night air snapping his cape behind him. I want older kids to hold the hands of the younger ones when a gory apparition runs by. I want parents to stand back at the sidewalk and let their tiny children find the courage to walk up to my door by themselves, or in a brother’s wake. I want them to talk to a grown up they don’t know in a safe way- because it builds communication skills. Don’t belittle it; these small lessons are where the growing happens. Also, I like talking to them.

We are the parents. We can put limits on how late they’re out and how much sugar they shove in their gobs. Yes, you can do it. Put on your big girl pants and a hat, make some candy rules and a hot toddy to keep you company and take those kids outside on the last dark night in October.  It’s worth it.

Can I Help You?