Please, just be a ninja.

Every Halloween, I vow to purchase the children’s costumes. Every Halloween, I end up masquerading as a seamstress.  I can follow the simplest of patterns, ripping out only 3 or 4 mislaid seams, but it takes me forever and if you look closely, (please don’t) my finish work is rubbish. Sewing is not a cheap activity. Buying fabric and required notions for a princess dress is more expensive than forking over the dough for a store bought one.  In fact, store bought is much cheaper because it doesn’t cost me countless hours struggling with tailoring skills that I don’t possess.

When we start discussing costumes, I secretly hope for something commercial and hanging on a hanger somewhere. Generic Princess? Happily. Ninja? Oh yes, please, yes. Batman, Ironman, Merida? You bet. My eldest, maybe because she’s sophisticated, maybe because she likes to push my buttons, picks wonderful characters that are woefully uncommerical. And I, not wanting to discourage her original thinking, comply. Ugh. 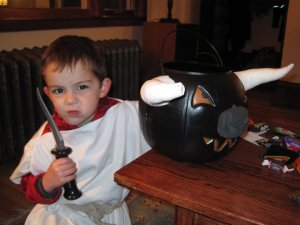 I got sucked into costume making with an easy one. I made a Theseus costume (his choice) for 4 year-old Bear out of a pillow case- hemmed slits for head and arms gathered at the shoulders, a braided belt of old curtain scraps, and a Minotaur head to hold candy. I knocked out the tunic in 20 minutes. Once I found a black plastic pumpkin bucket, the Minotaur was easy too. I fashioned a bull nose and horns out of Model Magic and glued them on. Cheap, easy, and literary: I win! The next year, I tried to convince him to be Perseus. I would only have to pull off the bull bits and glue on some plastic snakes. Everything else could stay the same. But he had grown out of his Greek phase and went as a store bought knight instead.

Up to this point, AJ is always happy to be some kind of princess, which is just fine by me. I purchase a beautiful costume for $25, and she plays dress up in it until it is too tight to squeeze over her body.

The hard one is Q. I stitched together Wendy Darling’s blue nightgown from Peter Pan.

Princess, Mary Poppins, and Ninja who insisted on carrying the Minotaur head for the third year in a row.

It was atrocious, even with all the time I spent on it. I was glad Halloween is an event that happens in the dark. But, she wore it as PJs for a year, so at least the effort wasn’t wasted. Last year was the big challenge: Mary Poppins. This one was all me, from head to toe. Red rubber grapes and fake daisies from the Dollar Store went onto my wool hat to make her cap. I folded, pinched, and stitched a ladies’ jacket from Goodwill into shape while Q was wearing it.  I made a red bow tie and pinned it to a collared white shirt she blessedly already owned.  A friend taped a piece of brocade over a big satchel for her carpetbag. It was all done but the skirt, the giant time suck of a skirt. There are a few easy ways to make full skirts, but they are not La Belle Époque shape and are not structured enough to look right.  So, because I’m an idiot who has difficulty prioritizing, I scoured the internet for historical dress patterns to use as a guide. I made my own pattern using a lot of algebra and butcher paper, and sewed the blasted skirt out of a remnant of blue upholstery cloth. It looked great. No one was as surprised as I.

Q went to her school carnival so proud of her costume. She told everyone how it had been made down to the last detail.  She had seen the whole process: the finding, figuring, and the complaining. I began to suspect that my priorities had been in the right place all along.

This year confirmed it. Q and her friend, Ann, began making Q’s costume during summer break: Queen Susan of Narnia. Ann, who has more confidence in her stitching, fashioned a skirt out of a piece of blue silk and they began decorating a blue t-shirt for the bodice. Does it look particularly like a royal frock? No, it’s better, so much better. It looks like two creative girls had an idea and made it happen with the skills and materials at hand. Did I offer to purchase a different dress or re-make this one to “look better?” Heck no. I would not belittle their accomplishment. I bought her gold buttons to sew down the front, bits of ribbon for trim, and a crown.

I suspect that nothing we do for our kids that is out of the range of feeding, clothing, and driving them around goes unnoticed. Okay, that may be a little too much Pollyanna, but when we meet them where their interests are and help them accomplish something, our efforts make an impact. I am so glad I stumbled through making that Mary Poppins costume; it helped Q think she could make this year’s costume (with the help of a can do friend.) I am so proud of it. This year, at the school carnival, I will tell everyone how it was made.

Can I Help You?